Vangelis scrapes by as a small-time weed dealer. He hopes to switch to a steady job, but his prior arrest record won’t allow that. When his neighbors threaten to call the cops on him, his life changes overnight. He leaves his apartment, drops his stash and takes refuge at his sister’s house, where he meets her boyfriend, Petros, a bouncer tied to the local underworld. Petros offers Vangelis a way out, by involving him in various crime deals, which can provide easy money and respect among the underworld. Only problem is Vangelis doesn’t want to be part of this world. 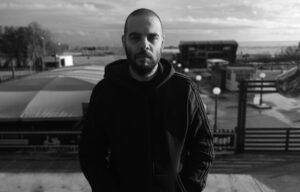 Βorn in Athens, in 1979, he became fascinated with cinema at preschool age. As a self-taught filmmaker, he started making his first homemade video movies around 2002. His first feature “Catharsis”, was a near-parody of the revenge film subgenre. He then decided to restart from zero, presenting the short films “Family Tree” (Best Newcomer Director award at the Drama ISFF) and “The Second Man”, starring Nicholas Triantafyllidis. He has directed documentaries for the Hellenic Broadcasting Association and music videos.