We are delighted to announce that our festival prepares its luggage and will travel to Frankfurt, 17 & 18 September at EL DORADO cinema! The Greek Film Festival in Berlin GOES FRANKFURT with a selection of five films from the 7th edition!

Expansion of the festival to other cities has always been an important goal for us. There are many German and international movie goers who wish to watch recent Greek film productions and discover the new Greek voices, and additionally there are many Greeks of ‘diaspora’  (natives) who crave to watch films in their native language. Τherefore to our great joy we …GO (to) FRANKFURT and intend to stay and grow there as well.

Our festival wishes to thank warmly the Greek Ministry of Culture and Sports for the support. 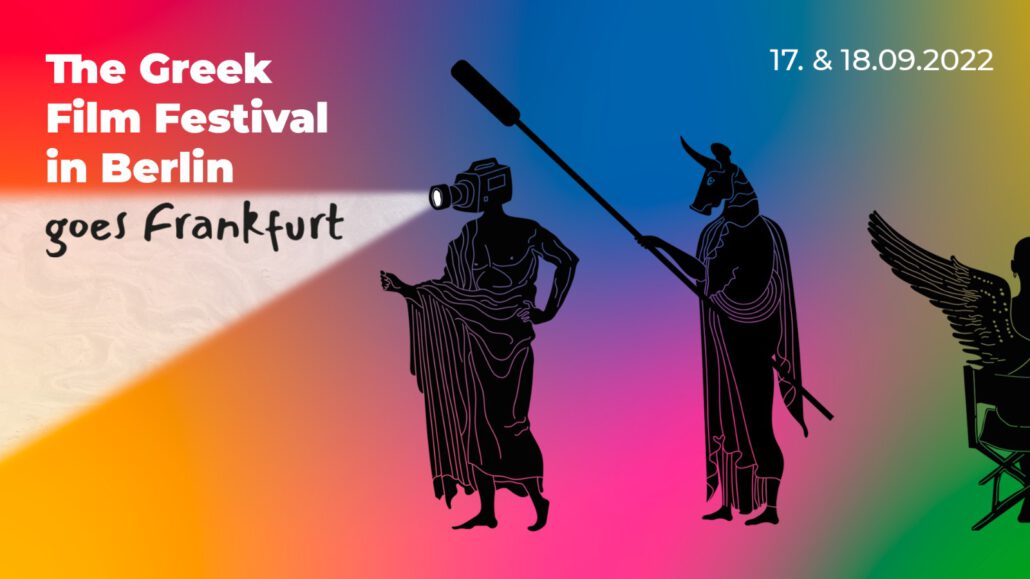 That was a wrap for the 7th edition of The Greek Film Festival in Berlin. What a night! Drag Queens Ruth Stoner and Fistina Sprudel warmed up the ceremony in euphoria and humor
The Emerging Greeks Award accompanied by 1000 euros sponsored by the Greek Film Centre went to HOLY EMY by Araceli Lemos with the following motivation:
“Based on a story of self-discovery by two different symbiotic sisters who live in a closed community of Filipino Catholics in Piraeus, the film manages to combine realistic milieu descriptions, subtle horror, mysticism, and psychodrama and takes the viewer into a fascinating inner journey”.
The Award was received by one of the main actors of the film, Michalis Syriopoulos.
A warm thank you to our Jury Valeska Neu, Bernd Buder and Nicos Ligouris!
After the ceremony our Closing Film MONDAY by Argyris Papadimitropoulos was screened. 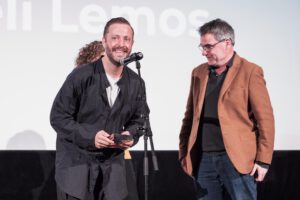 We are very proud to announce our program of films and events 2022. It has been hard work but we did it with joy hoping that you will embrace it once more and enjoy it as much as we did preparing it.
As for the current situation with the pandemic, the new edition will mark our return to the cinema after two years.  Our festival will comply strictly to the health protocols and we will be ready to safely welcome our filmmakers, guests, cinephiles and dear friends back where the films belong: the cinema hall.
Diversity, openness and freedom are the key-words that mark this year’s edition and serve as an  inspiration to all its sections. 36 films in total,  fiction, documentaries, short films, specials will be screened over the five days of the event with some selected repetitions.
See the full program here (link)
The timeline program will be release by the end of February.
Tickets will be available by the end of February at Babylon https://babylonberlin.eu 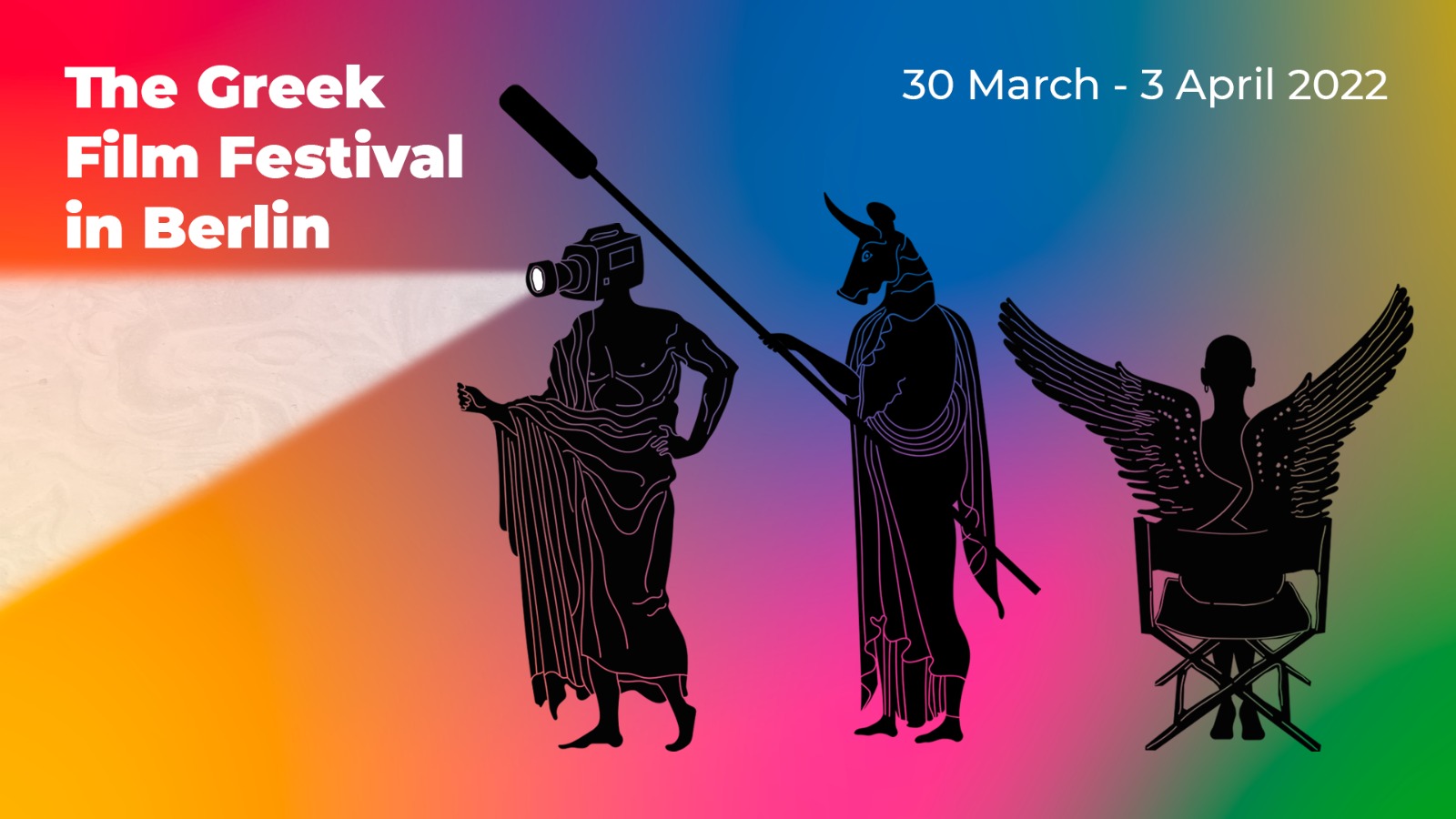 The 7th edition of The Greek Film Festival will take place 30 March – 3 April 2022 at Babylon in Berlin and submissions are now OPEN, with a deadline of December 3rd 2021. The application along with the Rules & Regulations you can find in the Homepage of the festival: thegreekfilmfestivalinberlin.com

After the 6th online edition, the festival is ready to return to exactly where it belongs: the cinema hall. New films, new tributes, new challenges are coming along and the festival is ready to embrace it all. As every year, our program will include 1. Emerging Greeks Competition for first and second features 2. Documentaries 3. Shorts 4. An LGBTQI+ tribute – 2020 despite the pandemic restrictions, was a very productive year for many good LGBTQI+ films and we are happy to select the best ones for our audience.

The Emerging Greeks Award is accompanied this year with an award of 1000 euros sponsored by The Greek Film Center.

‘The films return to the cinemas and our festival celebrates the colors, the multi-collectivity, the multi-subjectivity, the diversity. We are ready for the seventh cinematic challenge hoping that the audience will embrace it once again’ according to the organizers. 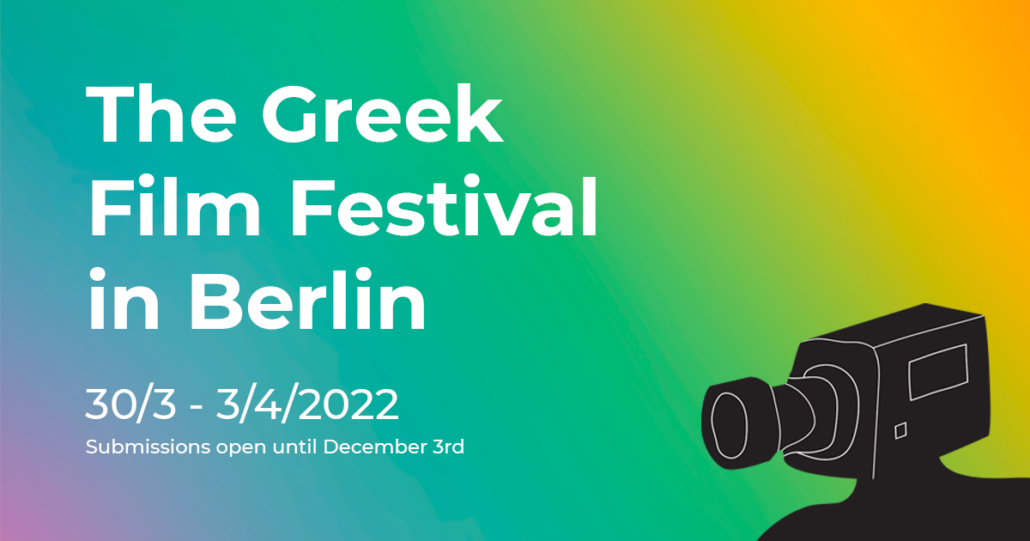 In a short and pleasant online ceremony, the Emerging Greeks Award of the 6th edition of the Greek Film Festival in Berlin was bestowed. Present were Jury Members Isona Admetlla (World Cinema Fund), Venia Vergou (Hellenic Film Commission) και Knut Elstermann (journalist-film critic, radio1\rbb), along the nominated directors and the organising members of the Festival.

You can watch the Ceremony at the Festivals’ channel on vimeo: TGFFB: Award Ceremony 2021 on Vimeo

The films participating in the Emerging Greeks Competition Section are:

According to the Jury: ‘’With hardly any dialogue, the film invites us on an unprecedented censorial artistic journey that exposes ancestral relationships of cohabitation between humans and animals and reconnects us with the dawn of humanity.  Sometimes crude, sometimes shocking, very physical and certainly with a gaze that captivates. An exceptional artistic exhibition that transcends and reveals new angles of our relationship with death. The Emerging Greeks Award, escorted by 1000 euros sponsored by the Greek Film Center goes to Kala Azar by Janis Rafa’’.

The pandemic restrictions will not permit The Greek Film Festival in Berlin to take place at its traditional home, The Babylon cinema. We will miss the presence of the audience and the contact with all of you very much. We will use the Festival Scope platform to offer the unique chance to the audience of ALL Germany to watch Greek films in the comfort of their sofas at home. Note: Greek films in the whole of Germany from 2 to  6 June 2021!

All the films will be available to watch 2 June, 9.00am – 7 June, 9.00am at https://www.festivalscope.com/page/the-greek-film-festival-berlin/

Like previous years this season the Greek Film Festival in Berlin is proud to announce its program. This year there has been many changes for the film business, the festival circle and the cinema audience. By definition, festival means to mingle, interact, watch films and be together. It is about togetherness. This pandemic has not allowed us for some time now to be together with our friends, peers, colleagues and, of course, the audience.

For a festival like The Greek Film Festival in Berlin which is based on its amazing, strong audience for five years now, it only makes sense to do it at its ”home”, the Babylon. Of course and above all, with the necessary measures, distances and use of masks, in order for us all to stay healthy and enjoy the films.

In case that there will be a lockdown, mind that we will push the dates of the festival back to February or March, and we will keep you posted all about it!

The full Festival Programme you will find within this link

We are honored to announce that from the upcoming 2021 edition the Emerging Greeks Competition Award for 1. and 2. film features will be rewarded with a 1000 euros Prize sponsored by the Greek Film Centre!

We are very happy for our great Jury of professionals!

Thank you to our Sponsors and Supporters

Feel free to spread the word and tag us as #thegreekfilmfestivalberlin!

It is this time of the year again and …the show must go on!

Against the odds and despite the fact that COVID 19 is separating us and keeps us in distance, our team already started preparing for the new edition of the fest, so save the dates: 20-24 January 2021!
With a brand new name, new LOGO and new website, the Greek Film Festival in Berlin gets in its new phase and era.
The call for entries is online already, so we’ll be more than happy to receive your submissions!
Submission link
For press inquiries please contact
sofia@thegreekfilmfestivalinberlin.com
—————————–

Best Film Award to MELTEM by Basile Doganis (France, Greece) A deeply touching and well developed film that succeeds to combine two family stories with the refugee’s issue, on the suffering Greek island of Mytilini – showing that, in the end, our cruel world is one… The element of the two French boys of Arab and Black African background that authorities cannot touch because of their official identities, shows the absurdity of this immense global problem the best way possible through this well acted, emotionally powerful film. 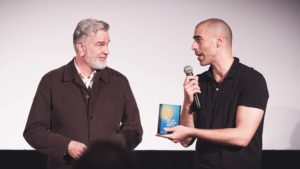 A speech on the growth of the audiovisual industry and the new financial motives of making films in Greece will be given by Lefteris Kretsos, Deputy Minister of Digital Policy, Telecommunications and Media in the context of the 4th Hellas Filmbox Berlin (16.-20. January 2019). The speech and the following discussion with professionals, journalists and the audience is entitled “Audiovisual Industry: Α Growth Challenge for Greece”.

Cinema, television, video games and the new entertainment platforms consist fertile grounds for growth being incorporated into the new growth law. Upon his appearance at the 4th Hellas Filmbox Berlin the Deputy Minister will analyse the parameters of the new term “cash rebate” –the financial return of 35% of any production expenses made in Greece- and the new “friendly” financial environment that enhances the motives to make audiovisual productions and co-productions in the country. Mr. Kretsos, among others, will answer queries regarding:
`
– Which are the conditions for joining the new financial program?
– What is the status quo regarding the co-productions?
– What is the process of implementing the reimbursement in Greece ?
– Why is the Greek financial context more attractive that the other countries’?

Lefteris Kretsos holds a PhD in Industrial Relations. Up until 2015 he served as an Assistant Professor of Industrial Relations and Human Resource Management at the University of Greenwich, London. Recently he has participated in European research and academic programs on industrial relations and social rights. He has published several related books on the subject matter. In 2015 he was appointed General Secretary of Information and Communication, and from December 2016 until August 2017 he served as General Secretary of the Ministry of Digital Policy, Telecommunications and Media. In August 2018 he was appointed Deputy Minister at the Ministry of Digital Policy, Telecommunications and Media.