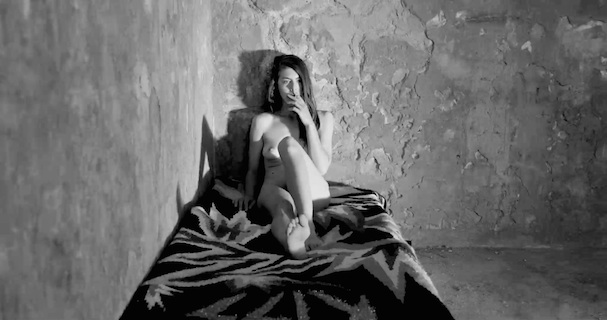 “Isolation, hope, lust and darkness. Five people standing like trees, waiting on a rocky isolated island for the ocean liner “The Great Eastern” to pick them up in a journey towards hope. A young butterfly flies between them and fucks everything up.” Inspired by the surreal oeuvre of Andreas Embirikos and especially his most important work “The Great Eastern”, the film deals with the longing for love as a utopia. The ambivalent space between everyday life and utopia of happiness that we constantly define is the field of action of the film. Where the “Old World” remains “Old”, with its weaknesses and darkness. Where the “New World” is about to rise. There is where human weakness manifests itself with the greatest possible intensity. There is where Love is both so human and so divine.

is the tip of an artistic factory producing music, films, artworks, magazines, events, art shows initiated by the brothers Lakis & Aris Ionas. In December 2016 they did a premiere of their new feature film “The Great Eastern” in which they co-wrote the soundtrack with Lee Ranaldo (Sonic Youth). Prior to that, they had already successfully realized the feature film “Lustlands” (2013).

The works of the Greek artists have repeatedly enjoyed great success at exhibitions and festivals all over the world, such as the Liverpool Psych Festival, the Reeperbahn Festival Hamburg and the Gallerie Kustera Projects in New York. The band, consisting of Aris Ionas, Lakis Ionas, Chryssanthi Tsoukalas, Marilena Petrides and Christos Beqiri, has already released two albums in collaboration with the well-known producer Jim Sclavunos. Another album was released in 2018.

The last 10 years Lakis & Aris Ionas have been publishing significant magazines for the Athenian underground music/art/film scene such as Velvet magazine and Lust magazine. Their studio is one of the most active cultural spaces in Athens. Going by the name Velvet Room they are organizing art shows combined with music gigs and DJ sets involving some of the best new bands and artists in Athens.